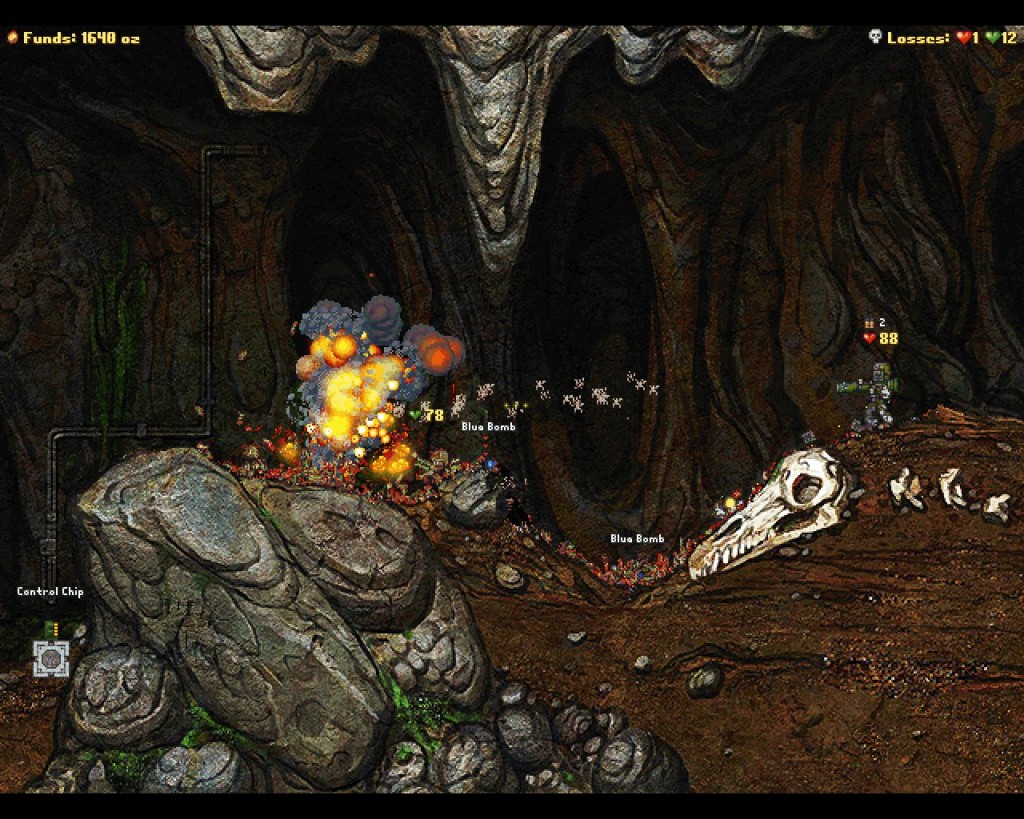 Cortex Command is another indie game from the nice folks at Data Reams LLC. While the game is incomplete, it has been released in playable alpha versions several times. It is a 2D platforming simulation game where objectives are carried out by “bodies” controlled from a distance by a brain.

Humanity’s technology has evolved so far that brains can be separated from the worthless flesh-bodies and can be sustained for long periods of time, being able to remotely control “bodies” from a distance. The player controls a brain, and at the start of each scenario it can call down various types of spacecraft to deliver whatever you select from the buy interface. The interface for selecting what will be drop-shipped down is a buy-menu with a shopping cart. Once you select what you want, you pay for it with gold, the game’s currency and then the specific dropship of your choice will deliver your load.

You can buy various bodies that have their benefits and different costs, and equip them with a variety of different weapons or tools. Tools such as miners and shovels can be used to dig the fully-destructable land, and to scavenge for the gold that you need to support your operations. You can also equip your men with weapons to create your rag tag team of fighters that will be especially important, as most scenarios will require you to either defend your precious brain hive, or attack the enemy. 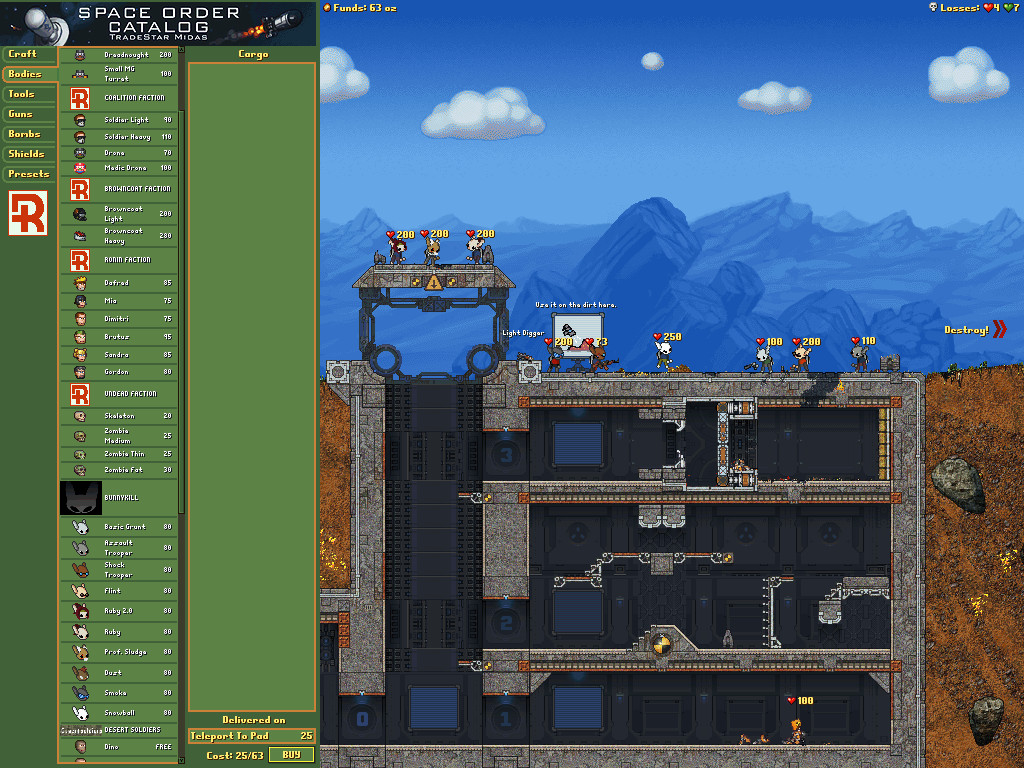 The game has a very steep learning curve. Although there is a thin tutorial mission, (which is brutally difficult in it’s own way) you are left to figure out how to do things yourself. However, once you get the hang of things it is entertaining to set up your own base of operations and station your bodies, put workers to mining gold and drop-ship units in, controlling them individually from afar with your brain. (Protecting your brain is of the utmost priority, if it’s protective glass case is destroyed you will lose.)

The biggest drawback to the game are the horrible controls, and the clumsiness of the engine. The game runs awfully slowly and only if you have an extreme level of patience, you will probably give up after an hour. Walking your units around takes eons, and even the “speedy” jetpack is clumsy to control and is very weak, holding more than one weapon will likely weigh it down to oblivion. The number of effects and the sheer amount of physics going on at one time is impressive (Tactics such as using your dropship as kamikaze or using it’s rocket engines to burn your enemies alive are very viable) , but the physics often glitches and your men and your enemies’ men will likely die from jumping on eachother, or by being crushed by some dirt particles. 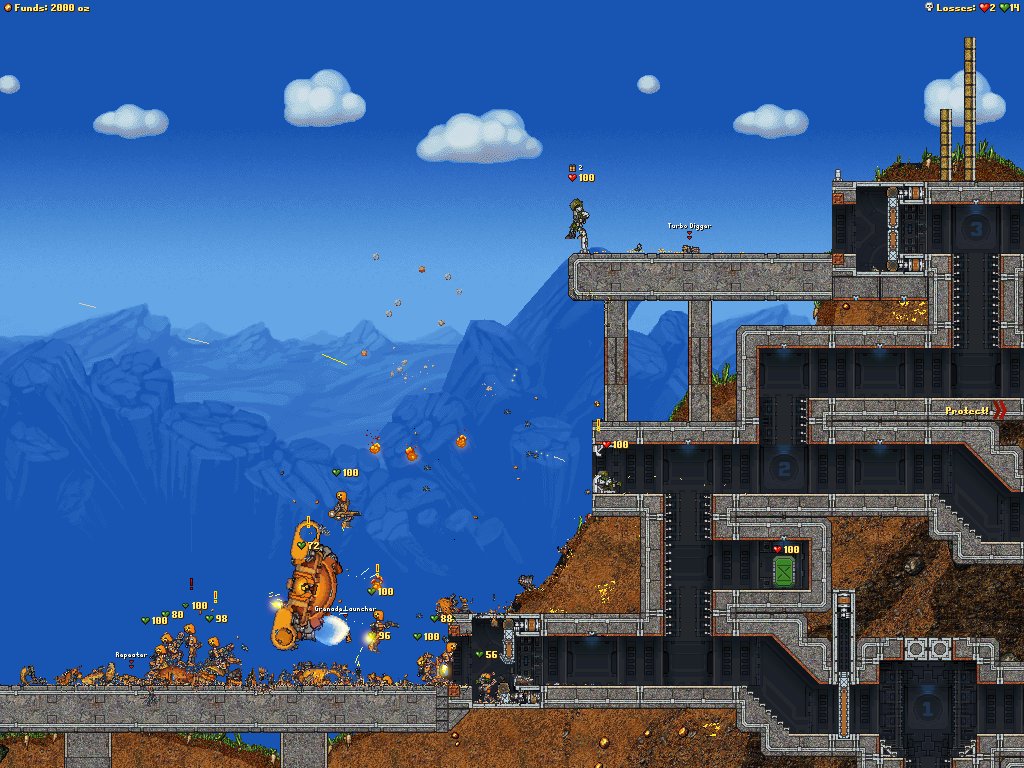 The game is a great concept but the execution lacks what it needs to become the best indie game. It could have been much better, and playing it is trying to build a stack of cards, unbelievably slow and frustrating. (But of course, as there are card house enthusiasts there are many who enjoy this game.)

tl;dr: Cortex Command is an unique 2D platformer with a plethora of possible tactics, although difficult to perform at times.