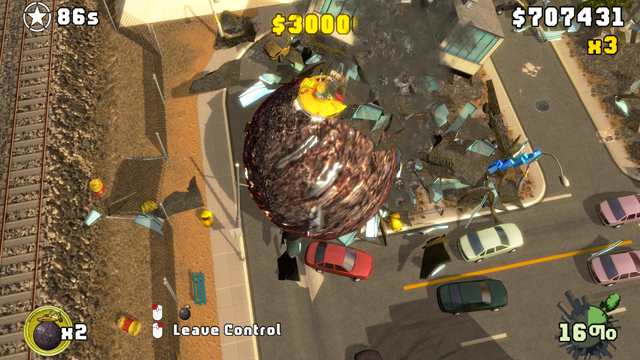 Demolition inc is a quite the game. A brief synopsis, you are Mike, and you must wreck the earth. Sounds fun. Silliness will ensue.

This physics based game is reminiscent of Blast Corps and Destroy All Humans. The storyline is simple, you are an alien who won a contract to level earth to create an intergalactic park. One thing German-based ZeroScale Game development has done right is how well the game is made. IT is done, complete and doesn’t have many bugs. You can see that they put time into this game, and they did not just rush till they got a semi-finished product. And this is especially nice because this is an indie game and indie games don’t normally have this polish.

The graphics aren’t really cutting edge and miraculous, but realism in a game like this would not fit. The cartoony graphics really bring together the whole aesthetic and feel of the game.

Gameplay is fairly simple, follow the roads and knock down any building that you see, and you must do this quickly because the army is on its way. To knock down the buildings you use some pretty silly methods, like using oil slicks, glue bombs and exploding cows. This all seems very silly and it feels like ZeroScale went overboard here on the Silly Scale. You have a few super attacks to use in times of need, but basically all your destruction will be caused using good ol’ hit and run, smash everything with vehicles. Use cars and other objects to destroy and level the buildings. When debris starts falling, suck it up for some extra money and clean up the block. Clean up a block and flora and fauna start sprouting on it. Clean up every block and you clear a level. The game isn’t particularly hard.

The music of the game is quite good and matches the feel of the game well, but it can get repetitive at some moments. The physics of the game fit the game, they aren’t particularly realistic but they are just silly enough. The mayhem can cause many chain reactions as tiny bits of shrapnel trigger exploding cows and destroy wuilding all across the map and start a huge explosive climax of alien demolition. The chaos of the game is quite entertaining.

tl;dr: Demolition Inc. is a fun cartoonish game, it isn’t particularly amazing but is good all-around and definitely worth a buy. No area is really lacking.