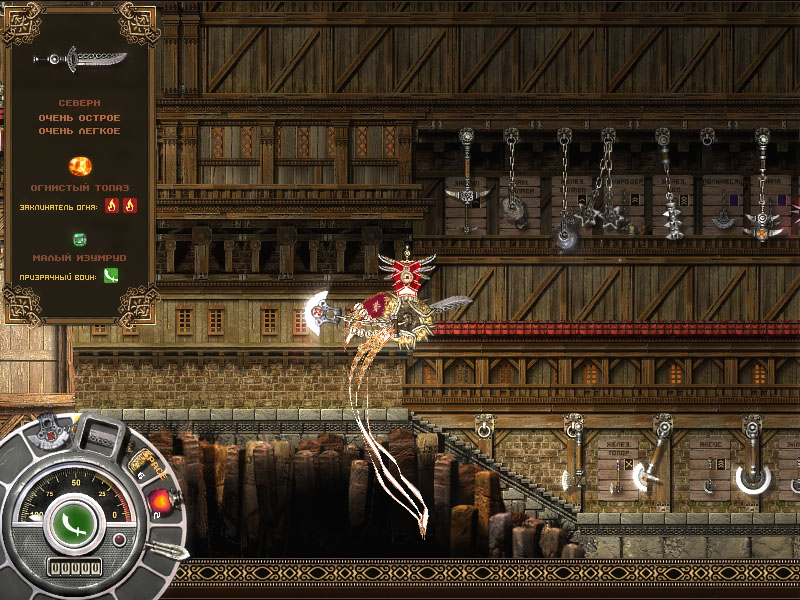 Hammerfight is a two-dimensional physics-based indie game produced by Konstantin Koshutin, released in September of 2009. Previously known as Hammerfall, players control a gyroscope flying machine, on which deadly weaponry are mounted, not limited to hammers, swords, and maces.

The general idea of the game, is that your character embarks upon scenarios in which you must use your flying machine to attack enemies by swinging blunt weapons, dealing damage through kinetic force, or pelting them with your addons such as guns and dynamite launchers. Newton’s laws of physics are used- so speed up if you want to deal more damage, and use the momentum of your enemy to land a lovely strike.

Hammerfight’s controls are a bit tricky to get used to at first. You might need to adjust your sensitivity frequently to fit your hand- unless you desire carpal tunnel. After that, it gets very fun, very fast. Swinging weapons such as maces at your foes can get very entertaining, especially when a well-coordinated attack makes contact. Flails were my favourite weapon, as they do brutal curshing damage from a distance, and are easy to control. When hits are made, cheers are set off and slow-motion effects can initiate, along with highlights of blue or red on your weapon. Gibs will fly out of your enemy, sparks will fly and wood and stone will be scraped off the wall with every impact. 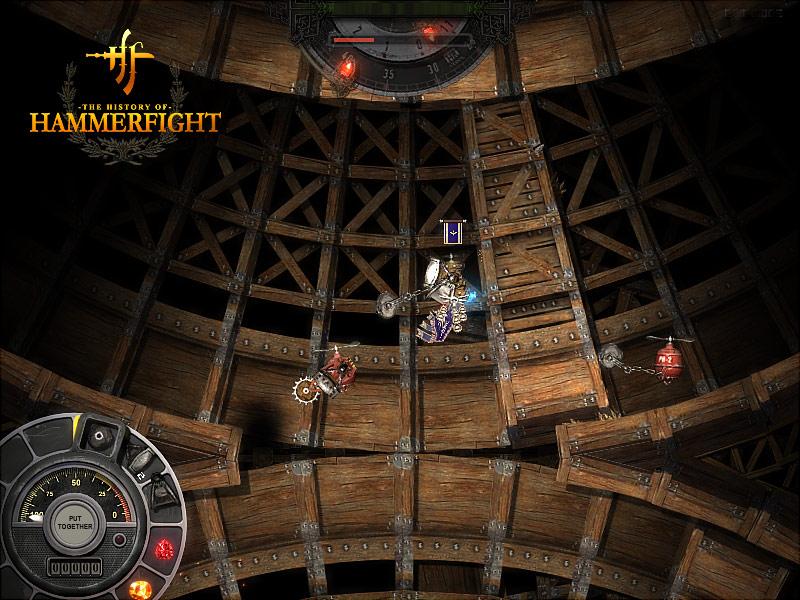 This game will make you frustrated. It is very easy to take large amounts of damage, that is nearly impossible to avoid. Striking an enemy flyer can cause it to explode- and damage you. Destructable debris you would normally associate as unimportant, visual effects will surprisingly damage you on contact. Many starter scenarios are brutally difficult, and the only alternative requires you to sacrifice all the gold you have earned so far to skip it.

The graphics are very nice to look at, and the number of juicy effects located in this game is immense. An interactive, moving backdrop of cheering crowds will enhance your fights- especially when a lantern lights the stadium on fire. Music is fitting and provides competitive excitement. The absense of a online multiplayer mode is disappointing because the amazing fighting system would make this game a hit.]

Out of all the indie games we have reviewed in this month of September, Hammerfight is the best, with a unique fighting system, a cool story, juicy effects with a tinge of annoying kinks here and there. 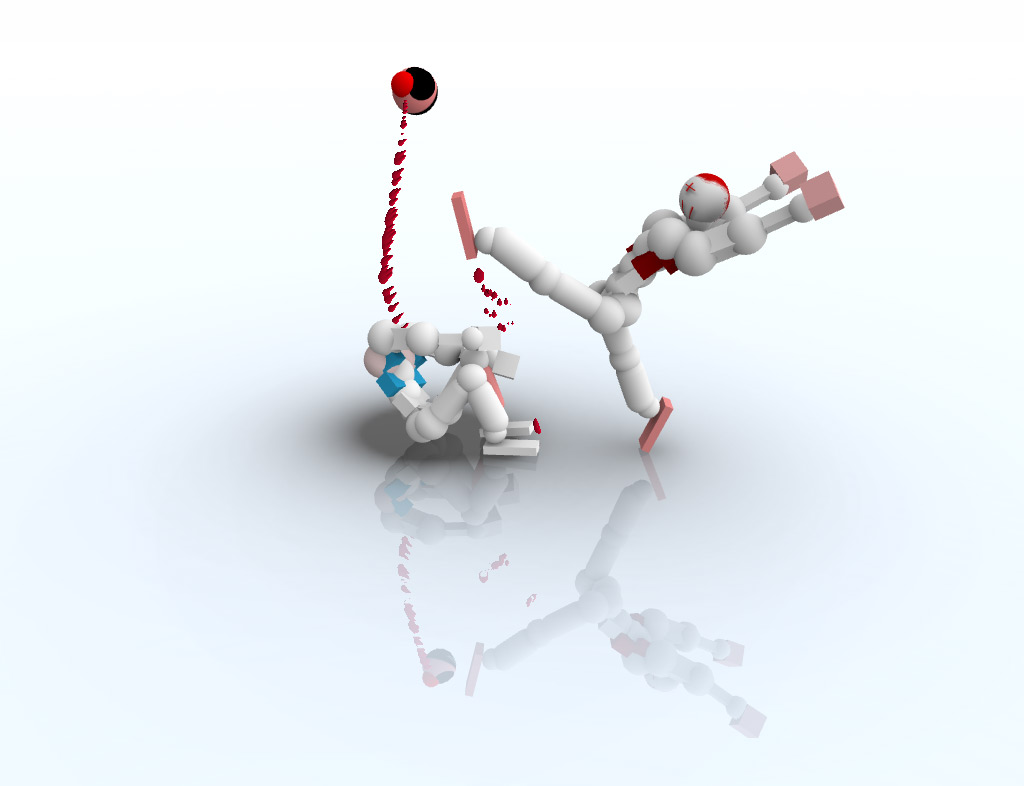 Toribash is a physics based, turn by turn, meticulous and extremely customizable fighting game by indie developer Hampus Söderström. With the ability to individually control joints and muscles, Toribash allows a huge array of possible moves, some that can be amazingly spectacular. It really is a shame that the game has such a steep learning curve, since running and jumping is almost impossible for most new players, reminiscent of QWOP in 3D.

Toribash was first started in March of 2006, and so far it has won a metric ton of indie game awards. But beware, the graphics are nothing more than shiny polygons, and the game play is absolutely nothing like any other fighter game out there. It is a slow turn-based fighting game, where players setup their muscle movements during the setup phase and then the game simulates the fight, often in intervals of only a second or two.

The controls are as follows: During the setup phase, click on the various joints and muscles to change whether they are either: relaxed, holding, contracted or extended. Certain body parts such as shoulders and chests can also be raised or lowered, or twisted right or left. Fast clicking and thinking is essential, because to successfully play you have to move dozens of muscles in one short turn, consisting of no more than 15 seconds at times. Meanwhile, you are shown a projected preview of how this turn will play out. When the setup phase ends, the actions that you selected are carried out and then the game pauses again for you to decide what to do to. 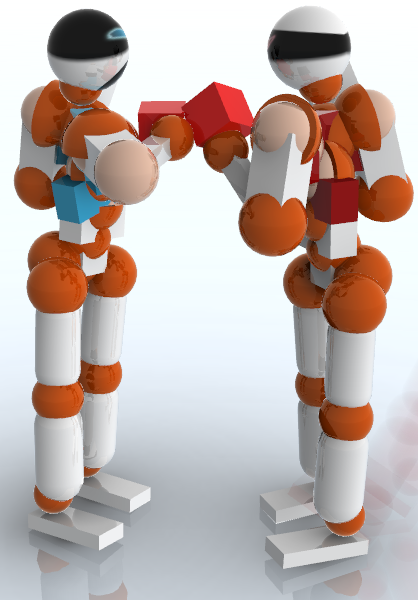 To win, you either get the opponent to touch the ground with anything but his feet or hands, or you knock him dead. Many losses are by people accidentally falling and losing matches for themselves, due to the difficulty of the game.

You’d be surprised how hard this game is. A human with his hand at his sides standing up, has to do this to punch properly: Contract his pectorals, contract his biceps, contract his brachioradiali, contract his deltoids; then he has to contract his triceps, turn his hip, and contract his anconeus. For 1 simple punch. Granted this is simplified in this game, but not by much. More complex moves, like a 360 spinning hook kick practically take every muscle in your body, and controlling them effectively is no easy task.

This game is not a pick up and play. The learning curve is steep, but the rewards are high. It is best to play with a friend, and fight each other, giving each other tips and tricks. In the beginning, it may seem extremely hard, but accomplishing certain moves can be very amazing to see happen, and watching a successful move hurt your enemy while supplying you with satisfying effects, sound and points can be very fun. 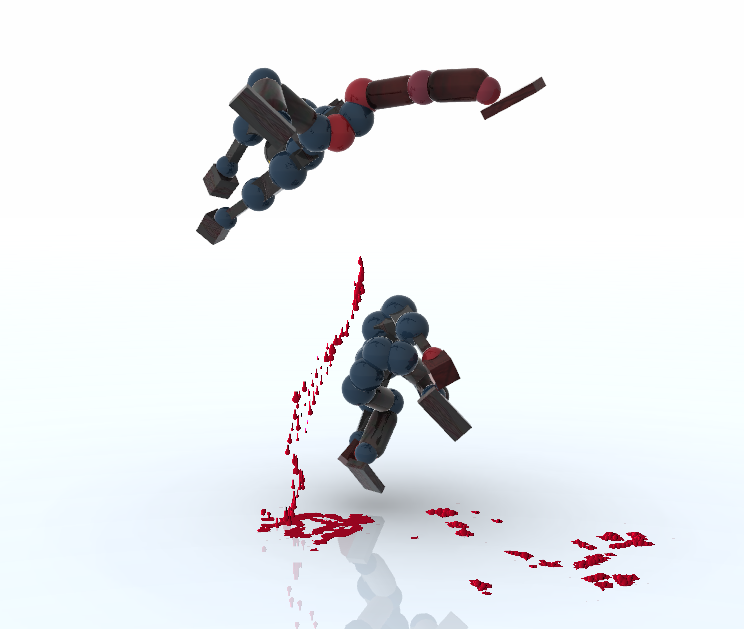 There is a huge Toribash online community. Mods, Clans, Dance Troupes, Tutorials, Tutors and Tournaments, its all there. There is also a huge Youtube community, showcasing videos kicks perfected to the inch, capable of taking off the enemy’s head in one strike. Some people get so good at this game, there is an example of one of two players kicking his own head off, then passing the “ball” to the other. This goes on for a couple of passes until the headless figure dies.

Overall, Toribash is a a very deep and good fighting game once you are accustomed and used to the controls, but that may take a while. The graphics aren’t much to speak of, and sounds are nearly non-existant, but the game is free and the gameplay can get very fun.

tl;dr: Toribash is a great fighting game, although the learning curve is steep, and it seems that the amount of players is starting to decline.